I am often nagged by epiphenomena, events sitting at the edge of How Things Should Be, though I don’t usually know what it is they are trying to tell me. Such things are, by definition, peripheral – or at least appear to be so – and at the same time rather difficult to describe. In this an epiphenomenon resembles a small but elaborate mechanism, like a joke in slapstick, which takes a huge amount of ingenuity to set up, but unfolds in an easy-seeming instant. Something about the joke’s contrivance, though, is carried over, we recognise in it an aspect of the contraption, and that makes us uneasy. The epiphenomenon has the same disquieting effect, but without the agency.

One such instance, which recurs with reasonable regularity, always hinting that I really ought to try to get it into words, is The Shower Head/Cap Event. This would appeal to the Keaton of One Week and The Electric House, for whom the flat pack and the gadget are modernity’s mysterious cyphers.

We have a slightly elaborated shower fitting with two shower heads: one a large piece, about the size of a dinner plate, fixed to the bathroom ceiling; the other smaller, a pipe-and-handle thing, hooked to the wall but portable. You lift or lower a lever to select between them. My wife likes to used this latter fitting when she’s not washing her hair, whereas, having no hair, I always use the fixed shower head. Because this might drip when not in use, she covers it with an inverted shower cap so its elastic band holds it in place. I sometimes bring her one of those freebie shower caps back from hotels for this purpose, though it’s not much of a gift.

I also sometimes forget to check whether it’s attached before switching on the shower, whereupon it fills, distends, and suddenly comes away under its own weight and strikes the floor with a resounding splop. This occurrence, which is over before I can intervene in any way, looks very like an octopus or jellyfish has somehow travelled through the pipes, and bonelessly extracted itself from the shower head (though not, obviously, in a minced or spaghetti-like form).

The last time this occurred, thanks to that succession of engagements with Keaton, Carrington and Milligan, I realised what this image was reminding me of. There’s a clip from a Parkinson show from just after ‘The Last Goon Show”, their reunion in October, 1972, where Harry Secombe is talking about Milligan seeking a particular sound effect:

‘I remember Spike once wanted the effect of somebody being hit with a sock full of custard…and he got the lady at the canteen of the Camden Theatre to lovingly prepare this custard for him. She said [here Secombe adopts a ‘Scottish’ accent], “Here ye are, Spike, here’s yir custard,” you know, and he said, “Thank you,” – and he took off his sock and he poured it in.

‘And he went downstairs, and he swung this sock around his head and hit it against the wall – and it didn’t have the effect he wanted…’

Either before or after this, I don’t recall, I’d bought Milligan’s little tetralogy of books, The Little Pot Boiler, A Dustbin of Milligan, A Book of Bits, and The Bedside Milligan, at 35p each, to take on holiday. I would’ve been 11 or 12, and this would have been our first or second package holiday, to Lido di Jesolo, or to Corfu. Very soon after that, I started buying Milligan books ‘proper’, beginning with the Goon Show Scripts. And after that, I began recording nonsensical ‘shows’ onto cassette with my schoolfriends.

For my sixteenth birthday, one friend, whose parents were building a new house near Reres Park in Broughty Ferry, allowed me to fill a sock with custard, swing it round my head, and strike it off a unplastered concrete wall. The effect, as Secombe had warned, was underwhelming, but the custard-filled sock as it was being slung strongly prefigured the look of an elasticated shower cap rapidly filling with warm water while dangling from a shower head.

While the adult world I was approaching through puberty and school examinations was constantly rushing to interpretation and indeed judgement based on the filtering out of absurdities, and the puritanical application of one or another ideology, something in me resisted, being both delighted and nurtured by nonsense. (I recall, in the same house, listening to ‘Wish You Were Here’, not for the first time, but, perhaps indeed for the first time, wondering who the ‘You’ was?)

The secret life of things, as manifested by such self-animation of the inanimate, is everywhere present in Leonora Carrington’s work, particularly in her depictions of furniture, and the consciousness she ascribes to food. 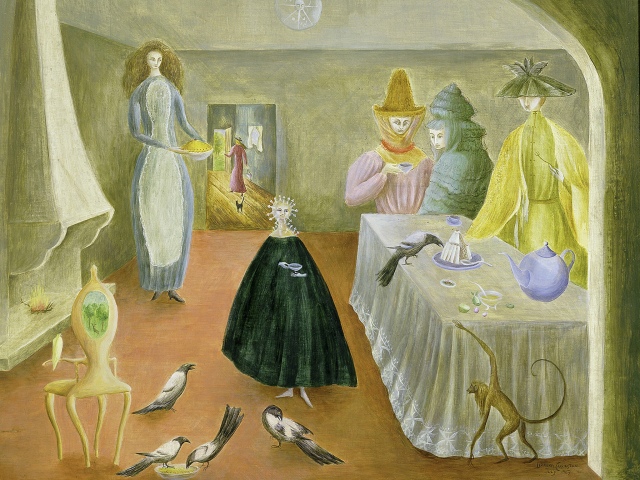 Chairs are alive, tables seem uncertain whether they are displaying picnics, ritual feasts, or dissections, beds embody the dreams they incubate, and, in her kitchens and gardens, the vegetables are always lively:

‘The full moon shone brightly between the trees, so I was able to see, a few yards in front of me, the origins of a distressing noise. It was two cabbages having a terrible fight. They were tearing each other’s leaves off with such ferocity that soon there was nothing but torn leaves everywhere and no cabbages.’

Even if you suspect that we may be cabbage all the way down, with nothing at the heart of us, not even consciousness, it is of course neither possible, permissible, or advisable to identify too much with the vegetation, the horses, or the furniture, nor with your romanticisation of the idiot, loser, or outsider.

If, as I do, you work within the cultural industries as a practitioner and educator, you may be too involved in these social structures for anything more than a part, a sliver, of your self ever to stand to one side, rather than as Leonora Carrington appeared to do for the long latter part of her career, to exist outside of all that altogether. But you can at least try for that dissenting part of you to overlap to some extent with your creative centre, with those approaches to experiences and memories, to artists and their work, which may lead, however long it takes, to some sort of creative output.

However, as all three discovered, even though you may think of it as a shelter, this might turn out to have aspects of MacBeth’s ‘confidence in his fretis’, or faith in omens. Not all shower heads are trying to tell us something, man. It can therefore also be as much of a source of distress as of security. Of course, the desire to find security in the unfiltered perception of childhood, the radically unstable territory of dreams, and the irrational depths of the imagination, can be seen as itself a sort of dysfunctionality. The unfortunate You of ‘Wish You Were Here’, Syd Barrett, had a sense of being simultaneously safe and utterly lost in his metaphoric woods, and indeed in the metaphor itself. Sometimes, in our efforts to get to the woods before the trees, we arrive at the ‘selva oscura’, a place that also precedes our selves.

This, then, as a writer awkwardly positioned in relation to the academy in which I work, and the industry which processes my work, and indeed the work, the writing itself, is the point at which I find myself. I might say ‘as ever’, but that would be to ignore the opportunity such awkward triangulations provide us with, and to plunge back into that Continuity, with its ready gauging of priorities and hierarchies and certainties about others that we never quite require ourselves to apply to our selves, rather than to pause here with the things that might be trees or people, dreams or omens, machines or bodies, that are in time but not quite of it, that do not mean to but may nonetheless do us harm, and pay witness to them.

Poet and pseudo-scholar W.N. Herbert was born in Dundee in 1961, educated there and at Oxford, where he completed his DPhil thesis on Scottish poet Hugh MacDiarmid, and now lives and works in Newcastle. He is Professor of Poetry and Creative Writing at Newcastle University, and his books are published by, among others, northern publisher Bloodaxe Books. He is also the Dundee Makar, or city laureate.
View all posts by Bill Herbert →
This entry was posted in current emanations, xenochronicity and tagged Broughty Ferry, Buster Keaton, Harry Secombe, Leonora Carrington, MacBeth, Michael Parkinson, One Week, Peter Sellars, Pink Floyd, Spike Milligan, Syd Barrett, The Electric House, The Goon Show, Wish You Were Here. Bookmark the permalink.