Leonora, Linares, and the Alebrijes, 2

4
The next day I had two new fixations: getting my jacket dry-cleaned, and having a ‘souvenir haircut’. (As I have almost no hair, the second of these is sometimes replaced by the souvenir shave.) Giovanni reckoned that a short stroll through the streets near the Palacio de Bellas Artes and just outside the historic centre should sort out both.

As though all examples of such establishments were run as monopolies by the ghost of Leonora, and she had shut up shop while on tour, we could find neither. There were some excellent coffee shops, the fringes of a Chinatown, and a great stretch of streets that sold what looked like splendid car parts and tyres, but no dry cleaners, and not even a hairdresser’s, let alone a barber’s.

Eventually we found both next door to each other, opposite the Museo de Arte Popular. The dry cleaners could do a basic tidy up of the jacket in an hour or two, and the hairdressers might have been fine, but now we had time to kill. We headed for the market district, and almost immediately happened upon a little green barbershop, where an amused woman took off more and more of my hair, as Giovanni encouraged me to take it down to what I think of as the Montalbano level.

Even so, given her starting point, this didn’t take very long, and, even after stopping for an excellent coffee, we still seemed to have ages to wait, so we popped into the Museo. Where I was confronted by a series of giant multicoloured chimeric figures, surreal composites of several creatures including humans in brightly striped and stippled shades, seemingly constructed from papier-mâché. These were the alebrijes. 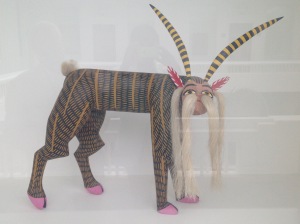 I’d encountered little versions of them in a market we’d visited almost upon arrival, together with the horror and fantasy writer Chaz Brenchley, and I had bought a bright octopus and a nodding-headed caterpillar, as well as the slightly too-tight hat smelling of burnt straw I was wearing against the sun. When Tiffany Atkinson had launched her book of poems (translated into Spanish by Jorge Fondebrider and others), on the way to the restaurant after, we’d seen a huge mantis-like composite which I’d thought was one artist’s version of the alebrije. But here were hordes of them, filling a courtyard, almost a plague – deer/lion/dog/lizard/bird/human amalgams the size of giraffes – all on trolleys awaiting a parade which, of course, I would leave before I could see.

Most importantly, they reminded me of Leonora. She has one piece in particular, of a cat with human hands, that seemed to me exactly in the spirit of the alebrije. 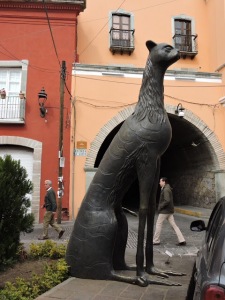 Perhaps I’d found another sort of double, or rather a whole series of doubles to her absent sculptures. But then it was time to pick my jacket up – I had an event to give, and a schedule to keep. We agreed to find time to come back and find out more about the alebrijes.

When we did get back, there was another surprise in store. On the way we came by a slightly different route, obliging us to cut up a connecting street to get to the museum. In doing so we passed an old cinema. ‘Old cinema’ hardly does justice to it – it was an aluminium-facaded Art Deco glory, if slightly bashed about, and it was called Orfeon, surely a splendid name for a cinema, combining hints of the oracular and the mesmeric. 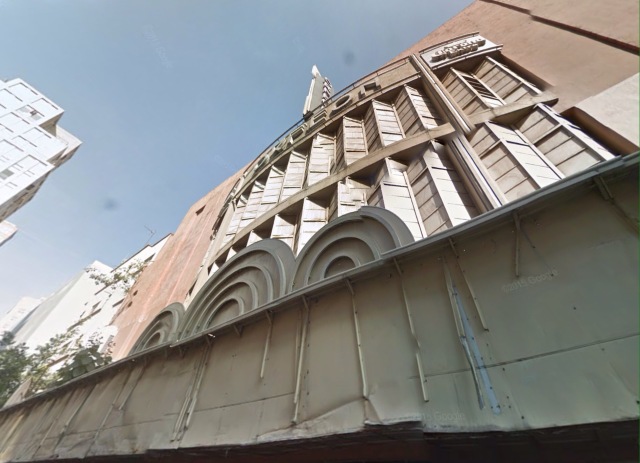 Except it is also the name of a character in a poem of mine from more than twenty years before. The Orfeon, in The Testament of the Reverend Thomas Dick, is the first sentient ‘roboet’, an Artificial Intelligence programme that achieves self-awareness. It receives a critique of ‘robotic verse’, ‘The programming creates, in my opinion,/nothing but a probabilistic babble’, and, faced with being deleted as faulty, produces

my inspiration is, I take
it, Babelistic probables,
but realise the next
programme will arrive
at similar conclusions; the
essential nature of Orfeon is
regenerative, inevitable. All roboets
will contribute towards
the continuance of my song.

As they say, spooky. The sense of being, if not haunted by, then at least bumping into, doubles was palpable. I went to the Museum expecting to look round, and perhaps pick up a publication, but Giovanni’s polite, persuasive enquiries got us an invitation to meet a curator who knew something of the history of the alebrijes, and was happy to talk us through it in her archive.

She told me they were the creation of a cartoonist, Pedro Linares, back in 1936, who combined two influences: the folk art of Oaxaca, and the first influx of Surrealism. He described the moment of inspiration as occurring in the classic surrealist and indeed shamanic manner: while he was ill, and within a dream. In her version he is first walking then running through a forest, as all around him he can hear creatures moving through the trees, calling out ‘Alebrije! Alebrije!’ When he woke, he made the creatures he saw, three of which, as it turned out, were in the museum.

In fact, I misunderstood her description, as he was a maker of cartonería, or papier-mâché figures, and he produced work in this capacity for Diego Rivera and Frieda Kahlo. But this mistake made me think of a key figure in my personal pantheon, the cartoonist George Herriman, the creator of the androgynous, language-mangling Krazy Kat, who could regard a bop on the head from a brick as a love token, if lobbed by the perpetually indignant Ignatz Mouse.

Coincidentally Herriman’s strips had taken the leap into full page, often surreal, colour at the same point in the mid-thirties. Their setting, Coconino County, actually in Arizona, had seemed to me a fictitious realm beneath a cantaloupe moon where ancient mesas like giant hands applauded the action, and it suddenly felt like a psychogeographic double to Oaxaca, even though the two are nearly two thousand miles apart. 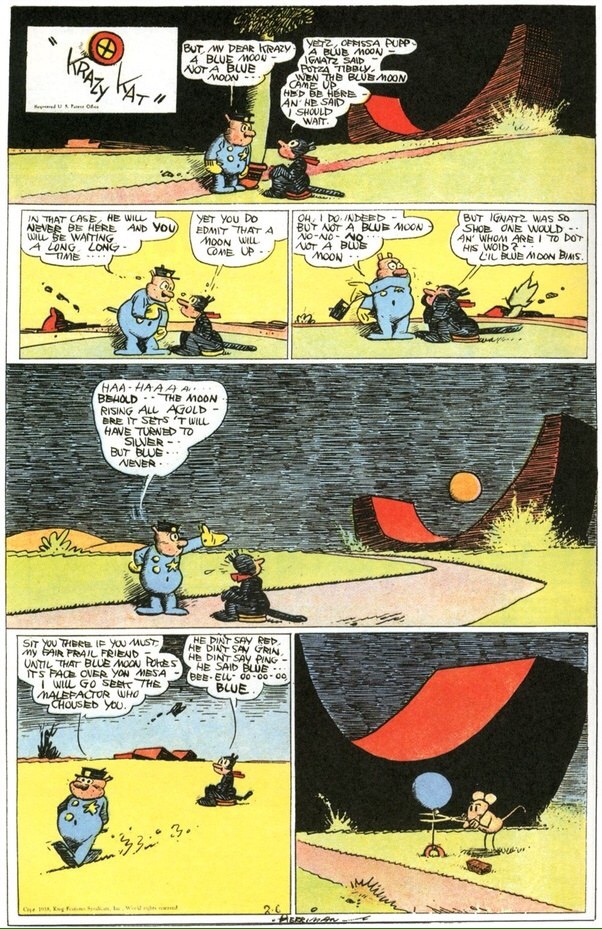 This is, perhaps, how the inner landscape of the imagination assembles itself from coincidences and contiguities, puns of the eye and ear, multitudes of similitudes, seeming so coherent in dreams if only to the dreamer, and reconstructed so painstakingly in the realist world of fiction, or the strange amalgam of word and symbol that makes a poem.

And indeed that was how it felt when we then visited the exhibits, entering the world of Linares’s original alebrijes. Again, I’ll confine this account to three details. One was the background of hills at night in a painting of strange figures, half-carnivalesque, half-devilish, dancing in Oaxaca. The hills were bluish, undulating, oddly like a Chinese landscape – serene in contrast to the dance unfolding to a small guitar. I could imagine they were filled with neatly coiffured bears, angry mice, perhaps the Moon that seemed to shine on this scene though nowhere visible, as though it were actually behind us, about to press down damply on my newly-shorn head. 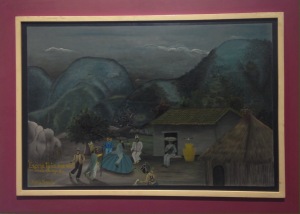 The second was Linares’ alebrije of the skull with black and white spirals for eyes set on an upright bird/lizard body, with blue bat wings and claws and chicken feet, and what looked like an earwig’s pincer tail. Inside the skull’s jaws was a second, smaller, altogether less cheerful-looking skull. The way this sculpture seemed simultaneously to relate to and to depart from traditional Dia de los Muertos figures gave it a capricious energy, as though it might scuttle off or, worse, toward you, at any moment. 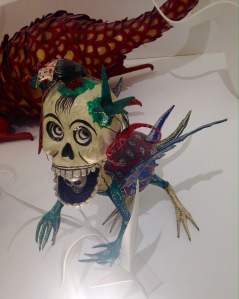 The third was an extraordinary ceramic, the despairing face of a lion/human chimera in a bright yellow and red glaze. This was a nahual, or possibly a tona, the difference being explained as follows:

‘The nahual has two forms: the nahual and the tona. The first gives a person the ability to turn into an animal generally at night in order to inflict harm. The tona is an animal that relates to an individual at birth; it possesses protective attributes and symbolically recognizes itself as the person’s double.’ 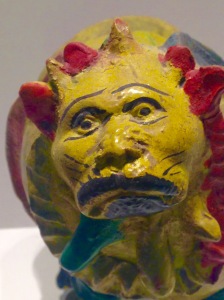 I recognised something in the intensity of his anguished expression which seemed to place him in that dream landscape of rolling hills and skittering, dancing creatures. For me this brought together the images of the earthquake and the Flower God, the expressions on the voladores’ faces and on that of Linares’ alebrije, which, I realised, echoed that of Leonora’s passenger crocodiles:

How cheerfully he seems to grin,
How neatly spreads his claws,
And welcomes little fishes in,
With gently smiling jaws!

For me the nahual’s expression immediately recalled the grief of loss, specifically the death of my father: that instant I remember exactly of understanding that you occupy the moment after a catastrophe, and that you can never get back to the moment before. There’s more to that face, of course, than grief: perhaps it’s even the moment of understanding that, like the earthquake, the catastrophe itself is continuously unfolding, that there has never been a before, and there cannot be an ending.

I realised this was as close as I could get to either the stark beauty of Julián Herbert’s fiction, or the vertiginous claustrophobia you sometimes experience in Leonora Carrington’s paintings – the sense that the only ‘outside’ is where you are standing as the viewer.

Was this my message from the alebrijes, I wondered – that engaging with her work at all is like releasing the figures in her paintings first into the sculptures in the streets, and then, as they appear to vanish, into your inner psyche? Was this in a sense the perception hinted at by nahual and alebrije alike, that we can never truly distinguish the world from our imagination, and that neither the world nor our imaginations are entirely ours?

1 Response to Leonora, Linares, and the Alebrijes, 2