Stop! in the Name of the New Unsettlement

So the public art proposals I’ve been posting on Strawberry Duck on Tumblr for the last few years aren’t exactly that; they are partly simple enough ideas which could actually be done (and at relatively little expense, I should add!) and partly things which could and perhaps should never be done – impractical proposals, the very impossibility of which is part of their purpose. This second category constitutes the public art of a virtual Dundee, then, and it is largely up to the reader which proposal belongs to which category.

When I was making stuff like this up before, I ascribed it to an arts collective that didn’t exist – the conceptual art wing of Informationism, if you like. They were the Institute for Incremental Anarchy, or the IIA.

Of course the border between the invented and the fictional is incredibly thin (and certainly a lot more porous than that between art forms, so that the literary and the art world rarely align). One might say that the difference between the two is that invention is an event, whereas the fictional is a narrative composed of a succession of events – and it is the element of necessity in that succession which turns any narrative into an actual plot. The IIA, though they were cast as a conspiracy, never really had a plot – indeed I rather lost their plot in the intervening years, along with those of various other projects.

But time has a way of impelling us to impose our own narrative interpretations on events, as Brian Wilson was eventually able to do with Smile – although, as the musician and writer David Toop has suggested, perhaps being never-realised was actually its most appropriate form, conjuring labyrinthine alternative histories of late twentieth century music while not actually possessing its own definitive form.

It therefore seems reasonable to assert that the following seven proposals constitute the latter-day activities of the Institute for Incremental Anarchy in a Virtual Dundee which, as we can see via such phenomenon as the Cardboard Arch, really does touch on the real Dundee at certain key points. 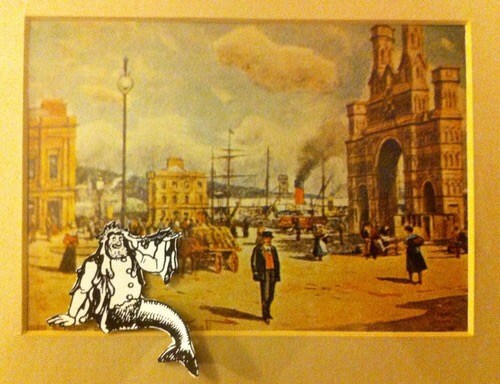 (It further seems reasonable to say that if anyone should wish to join the Institute of Incremental Anarchy (Virtual Dundee Chapter), I would be very curious to see how that could actually happen…)

From St Andrews Day to Burns Night, searchlights placed in Broughty Ferry, Tayport, Dundee, and Newport at the points of embarkation for the Fifies will be switched on each evening (river traffic permitting), creating bridges of light across the River Tay.

These will be carved from limestone so that they erode over time under the effects of weather, but exact replicas will be kept in a nearby railway shed.

A prominent feature of the new railway station greeting new arrivals to the city will be a mosaic of ‘The Poet McGonagal Presenting His Poetic Gems to the City of Dundee’. This will follow the design of Domenico di Michelino’s ‘La commedia illumina Firenze’ but be executed in a Byzantine/Socialist Realist style like the work of Soviet artists in the Moscow Metro.

(At the opening, an elaborate hoax will be played on the assembled dignitaries in which a grisaille version – actually an exact scale print – will be unveiled by Muriel Gray. As their faces fall, she will then unveil the actual mosaic in all its technicolor splendour.

The print will then be torn up along predesigned perforations, and shared out among the attendees.)

4. There, There, All Better Now

This project consists of making and applying giant elastoplasts for and to stone and bronze. Placed initially on the knees, elbows, and bridges of noses of public statues, the sticking plasters will grow larger until they begin to ‘heal’ monuments and buildings across the city and, in the wake of elections and referenda, the country or countries.

Little solar panel footlights along the esplanade in Broughty Ferry and in other sites throughout the city will be redesigned to form letters of the alphabet.

After an initial stage with just the Roman alphabet, this will be extended to include the Greek, the Arabic abjad, then Georgian, Hindi, key characters in Chinese, and the Kanji syllabary, etc.

It will eventually be possible symbolically to walk the world from the Stannergate to the Rail Bridge.

An ongoing series beginning with the Moc Gonagall Chop – a metal mould enabling Dundee’s chip shops to produce mock chops in the shape of McGonagall’s profile.

Also available for the Land o’ Cakes are cupcakes with a single letter on each spelling out the utopian sentiment CAKE IS OUR FRIEND, to be displayed in key bakers, and replenished throughout the day as each cupcake is sold.

A writer will be rowed out to the Old Pile Light each morning, deposited safely, and retrieved again at night (tides- and weather-permitting).

Each writer remains there until they complete a piece of work which can be published in an ensuing anthology, so the residency takes on the air simultaneously of a retreat and a custodial sentence.

(Will require the interior to be made weather- and wifi-proof.)

Poet and pseudo-scholar W.N. Herbert was born in Dundee in 1961, educated there and at Oxford, where he completed his DPhil thesis on Scottish poet Hugh MacDiarmid, and now lives and works in Newcastle. He is Professor of Poetry and Creative Writing at Newcastle University, and his books are published by, among others, northern publisher Bloodaxe Books. He is also the Dundee Makar, or city laureate.
View all posts by Bill Herbert →
This entry was posted in dundee makar and tagged Anne Stevenson, Billy Mackenzie, Bonny Dundee, Brian Wilson, David Toop, Domenico di Michelino, Dundee, Frances Wright, Grizell Jaffray, Hungry Mary, Land o' Cakes, Mary Brooksbank, Moscow Metro, Muriel Gray, Robert Wedderburn, Smile, The Beach Boys, The Institute for Incremental Anarchy, Virtual Dundee, William McGonagall, William Wallace. Bookmark the permalink.