It is as an opposition to this mindset that I welcome, rejoice in, and kick myself for missing, the construction and demolition of the cardboard Royal Arch by Claire Dow and Olivier Grossetete. Such fond, culturally-informed and – yes – absurdist approaches attempt to dismantle simplistic and parochial definitions by evoking the pleasure principle.

There is a formula in this that I recognise myself groping toward over the addled decades: a type of unsettlement practised by artists and writers as diverse as George Wyllie, Leonora Carrington, Ivor Cutler, and, latterly, Grayson Perry or Mark Waldron, that appears to be comic but cannot be entirely defined – and thus, for many people, dismissed – as such. It works by blending continental confrontation (épater le bourgeois, Dadaism, Situationism) with disarming Britishness (nonsense and whimsy, Carroll and Python).

Similar to the workings of stiob, it requires an active engagement from us – positive or negative – to make sense of it at all. Confronted by the unsettling we find ourselves asking ‘Is this a real thing? Are they serious? What am I supposed to do? Is this still funny? Who allowed this to happen?’

The other week, I was visiting the sundial in the Geddes Quad of Dundee University, enjoying the intermittent sunlight that passes for early summer in these parts, when I realised I’d made a mistake which, in a small, incremental way, encapsulates this unsettlement. 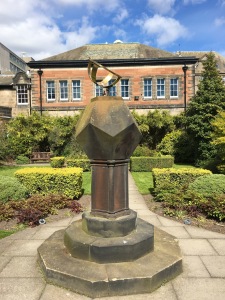 The quad itself is easily accessible just off the Perth Road, just before Airlie Place. The sundial provides a faceted point of focus to an enclosed space of small lawns, flowerbeds and hedges – exactly the sort of shrubbery that McGonagall and generations of municipal postcard photographers got off on – and buildings which carry significant traces of their history in incised text, commemorative plaque, or technical signage.

I’d been told about the sundial perhaps back in those same nineties, and I’d misheard its title. It is, technically, an analemmic sundial, meaning its construction relates to the variable position of the sun in the sky relative to a stationary observer. At some point, however, I’d confused the terms ‘analemmic’ and ‘analeptic’. Despite my ongoing self-proclaimed curiosity about Greek, I hadn’t even checked what ‘analeptic’ meant (it means ‘restoring’).

Back then I’d vaguely thought the viewer was, if they positioned themselves correctly, the gnomon, as is sometimes the case with an analemmic sundial, but no. Of course, not knowing what ‘analeptic’ meant, I hadn’t had to think how being the gnomon to a sundial could possibly be restorative. (Exposure to vitamin D?) So the visit was not just to the actual sundial, but to the folly of my imagined sundial – it was an encounter which unsettled that certainty.

As I stood waiting for the clouds to permit the sunlight to fall upon the brass curve of the actual dial (when it did, I saw that, analemmatically speaking, it was an hour slow), the invented term ‘analeptic gnomon’ began to take on a new interpretation. If I was the gnomon, and my own daftness the clouds, then the correcting light which fell had indeed had some clarifying, healing function.

Something in that moment of meaningful misreading would seem to suit the anthropocentric holistic thinking of Patrick Geddes, who wrote in Cities in Evolution (1915) ‘“Local character” is …no mere accidental old-world quaintness… It is attained only in course of adequate grasp and treatment of the whole environment, and in active sympathy with the essential and characteristic life of the place concerned’.

He was also opposed to the concept of urban clearance which Dundee, ironically, as a place which hosts a Geddes Institute, has particularly suffered from, not least in the loss of the Royal Arch, describing it not only as ‘unsparing to the old homes and to…neighbourhood life’ creating ‘worst congestion in other quarters’ (translation: demolish the Overgate and build Whitfield), but as conceptually ‘conventional’, i.e. intellectually provincial in its failure to solve problems, opting rather to reproduce solutions from elsewhere.

(In this context, however, we shouldn’t forget how a disgruntled Dundee student characterised his teaching: ‘Forget the silly notion that I’m here to teach you botany/ and never come to me for facts because I haven’t got any.’*)

*I am indebted to Erin Catriona Farley for sourcing this couplet.

Poet and pseudo-scholar W.N. Herbert was born in Dundee in 1961, educated there and at Oxford, where he completed his DPhil thesis on Scottish poet Hugh MacDiarmid, and now lives and works in Newcastle. He is Professor of Poetry and Creative Writing at Newcastle University, and his books are published by, among others, northern publisher Bloodaxe Books. He is also the Dundee Makar, or city laureate.
View all posts by Bill Herbert →
This entry was posted in dundee makar and tagged Claire Dow, Dadaism, Dundee, Dundee University, Erin Catriona Farley, Geddes Institute, George Wyllie, Grayson Perry, Ivor Cutler, Leonora Carrington, Lewis Carroll, Mark Waldron, Monty Python, Olivier Grossetete, Sir Patrick Geddes, Situationism, The Overgate, Whitfield, William McGonagall. Bookmark the permalink.